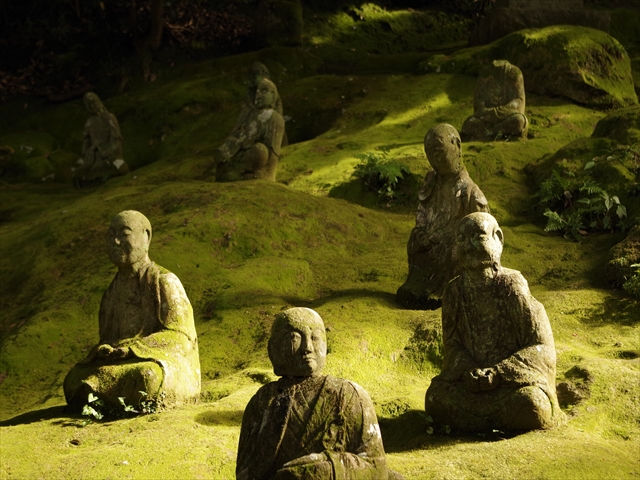 Miyamoto Musashi, the master of sword fighting, strategist and also the master of art, considered to be the most respected and the strongest Samurai in Japan’s history. He is renowned to have won over 60 duels with Samurai rivals through his life. Then decided to live in Kumamoto in his closing years and finally finished writing out a magnum opus “Gorin-no-Sho” or “The Book of Five Rings” shutting himself for two years in this cave, “Reigando”.

A 30-minute ride from the centre of Kumamoto city leads you to the entrance to this cave. You can also take a bus at “Kotsu centre” bus terminal to “岩戸観音入口” (Iwato Kannon Entrance) for 50 minutes and take a walk for another 20 minutes to get here. Walking down from the car park, you will find a Zen temple on the right hand side and on the left is an entrance which is also a tiny museum, exhibiting Musashi related antiques. The fee is 200 yen per person.

As you pass the gate, you will find stone statues on the right hand side hill, which are called “500 Rakans” built in 19th century. Rakan means a holy man who deserves to be respected and given charity in Buddhism thought. Finally, you will find the cave, which has a temple in it. Imagine Musashi set himself lonely in the middle of a mountain to be concentrated on writing out the book, Gorin no Sho. The cave also offers a peaceful scenery of rice terraces stretching on opposite hills.

On the way back to Kumamoto city, it would be highly recommendable to visit Shimada museum which exhibits Musashi related things such as original / replica / copies of writings / paintings / swords / armours, etc. The entrance fee is 700 yen per person.
NOTE: Photography is not allowed inside.